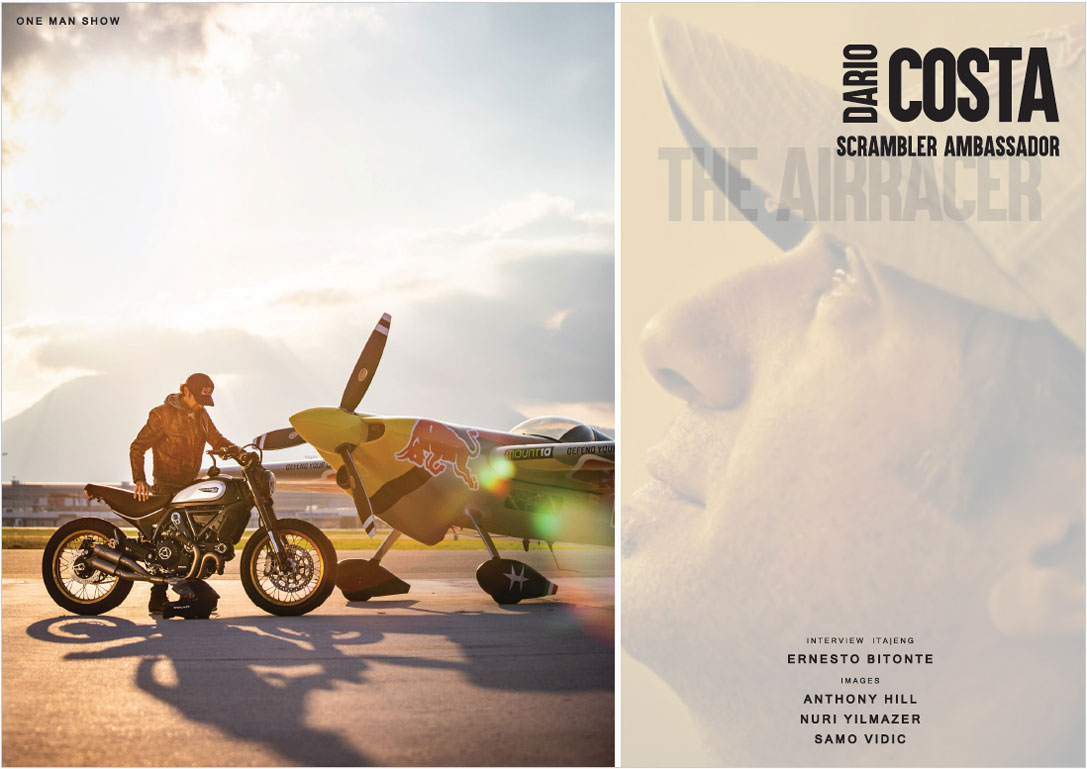 Hi Dario, we finally managed to catch you…

and apparently you are not always “in the air” but you are also a fan of two wheels. We know that your Scrambler Special was prepared by Ducati Salzburg.

SS: Tell us a little about the idea and your experience as a Ducati Ambassador.

I grew up with a passion for engines just a stone’s throw from the Ducati headquarters, I could only fall in love with the style of uniqueness that make Ducati a very special motorcycle brand for me, the brand that first put some airplanes into its bikes . In the last three years I have had the privilege of having almost all the Ducati in production since 2019 on test and I have tried to understand what were the characteristics that I would have liked to have in my ideal bike and this is how my Scrambler Special was born.

I wanted to have the two revolutionary inventions of the pioneer Ing. Fabio Taglioni, two-cylinder L-Twin and desmodromic valve system as a basis. Then it had to be as agile as the airplane I fly and that’s why we changed something by working on the bike which is now inspired by Flat-Track motorcycles. In September 2021 you set five aviation records on an Istanbul motorway, taking off from inside a tunnel and entering directly into the next 1,730m long tunnel.

SS: Whizzing inside a rigid structure is pure adrenaline! How do you manage it?

With preparation and respect for fear.

SS: You also set the Guinness Book of Records for the first and longest tunnel ever flown by aircraft. We have seen what you have been able to do with your plane, incredible… and we are curious to know something about your relationship with the plane you fly. You use the Extra 330LX and Extra 300LP regularly, but your favourite is the Edge 540. Give us two perfect adjectives to describe this crazy plane.

SS: Who is in charge of preparation?

I take care of the development with the support of specialised technicians.

SS: What speed does it reach, and what was the top speed reached in that tunnel?

In level flight it exceeds 400 km/h, but is limited to 426 km/h to protect the structure. In the tunnel the maximum speed was 280 km/h.

SS: It seems that since you discovered the Red Bull Air Race in 2003 you have had nothing else in mind… and so you were the first Italian to win the Red Bull Air Race Challenger Cup on Lake Balaton in 2019. Italian pride, for the country, for sport, for aviation, but not only… Tell us, how great was it?

Immense. Indescribable. Italy is for me the country that started the dream of flying with Leonardo Da Vinci the first of all to design a flying machine for humans and to bring the flag to the top step of the podium in this discipline is an indescribable honour.

SS: We know that right now you are training hard because, you will soon be competing in the top category of the Air Race World Championship now called World Championship Air Race which is scheduled to start in 2022. This world championship replaces the Red Bull Air Race and its highest category… What is the secret to face such an important competition?

Come on, I can’t tell you everything 😉

SS: You are from Bologna, land of motors and passion… and certainly when you can you will take your Scrambler to run on curves or on mixed roads… How do you enjoy the bike?

In any way possible, from daily commutes… to long day trips, any excuse to use it is good, but I can’t wait to take this bike to a flat-track oval.

Dario, we can’t wait to follow your next Air Race!!! For the moment, thank you for your time, a big hug and keep us informed with your socials!!