NOTHING CAN STOP THE WHEELS AND WAVES 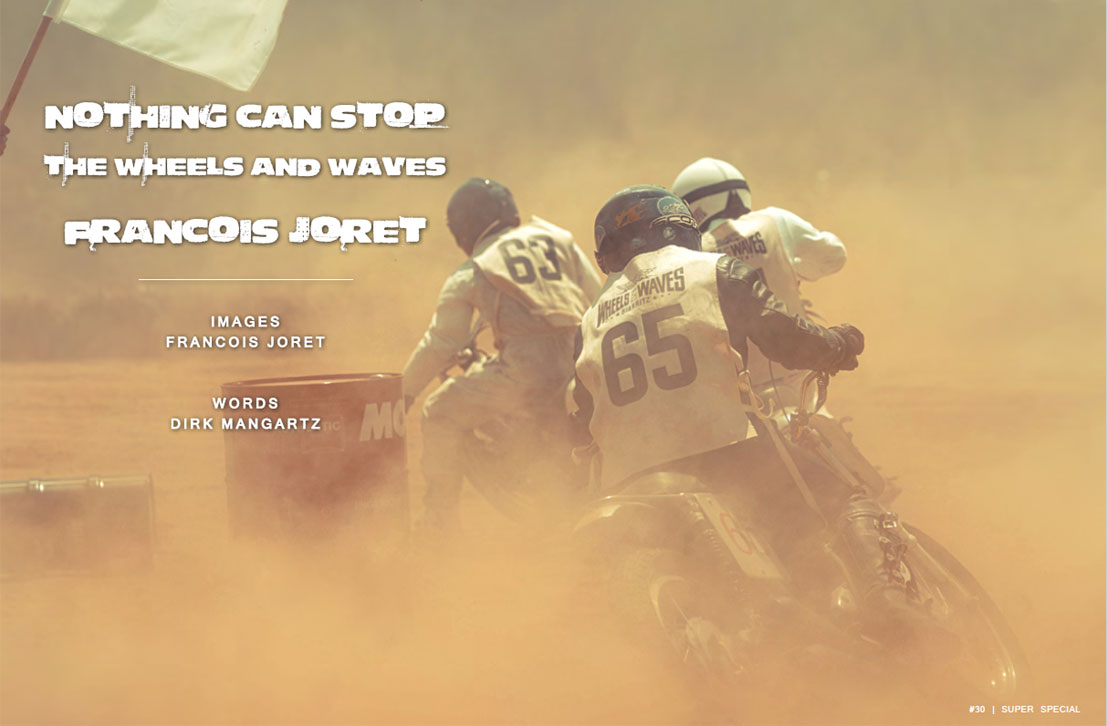 When the first Wheels and Waves Festival started at the Biarritz lighthouse in June 2012, exactly ten years ago, the unusual event was nothing less than the starting signal for a completely new facet in our motorcycle cosmos. No longer thick tires and gigantic displacements characterized the motorcycles of the participants, but style and minimalism. And they were allowed to be classic.

The riders of the bikes from the 60s and 70s had also dressed up – contemporary, chic, stylish. This was matched by a well thought-out media presence with groundbreaking graphics, its own fashion and cinematic accompaniment. There had never been such a sophisticated aesthetic of its own before.

No one before had managed to establish themselves alongside the somewhat dusty outlaw bikers, touring riders and vintage motorcycle enthusiasts. “A new era had begun, beyond born-to-be-wild campfire romance and boring classic bike gatherings,” reports Jörg Solar, who travels to the Atlantic every year with his BSA A 65 from Hamburg in northern Germany. He adds: “And the Wheels and Waves was the initial spark.”

After the original organizing team around the club “The Southsiders” from Toulouse dropped out in 2018, Jérôme and Valérie Allé, Julien Azé and Benjamin Monge took over the organization of the meeting. In addition to the Village at the Cité de l’Océan in Biarritz, they had various event points spread throughout the Basque Country.

There was the Punk’s Peak drag race on Mount Jaizkebel in Spain, the El Rollo Dirt Track in San Sebastian, the Art Ride motorcycle and art exhibition in the center of Biarritz, and the Moto Cross Battle Swank Rally in Saint-Pée-sur-Nivelle in the backland.

In 2020, however, the first dark clouds began to gather over the success story. Like so many events worldwide, Wheels and Waves had to be suspended due to the Corona pandemic. Now, the orga team put its full energy into 2021.

Already in January, the governor of the municipality of Biarritz had given the green light and signaled that the event could take place under certain conditions. Full of confidence, Jérôme, Valérie, Julien and Benjamin published the date for the 10th anniversary edition of the festival – from June 30 to July 4, Wheels and Waves 2021 should take place.

What follows sounds like a thriller: the sub-governor spoke out vehemently against the event.

In times of Covid-19, it was far too dangerous to hold it, he said. The prefect also had a negative opinion, and an endless discussion between supporters and doubters gathered momentum. “Two camps have formed within the city administration” explains Valérie. “On the one hand, there are those who see the fresh wind of Wheels and Waves as an opportunity for their city and who see the enormous economic factor. On the other hand, those who have always found the many motorcycles too noisy smell an excuse to finally get rid of us. In 2019, a spectator was also injured in the leg during an unsuccessful nighttime burnout. Since then, the event has been considered irresponsible by skeptics. And between these hardened fronts sits a mayor who can’t get her way.”

So it went back and forth for months, mostly negotiating over rather unimportant details, not the big picture.

“Then, on June 10, 2021, 20 days before the start of the event, when the ban on the entire event came from the municipality of Biarritz, it hit us like a shock,” the expression on Valérie’s face darkened.

“Less than three weeks before it is supposed to start. We had invested an incredible amount of work, made thousands of phone calls, spent lots of money and now this. Interdit! Banned!”

The safety of the many spectators from infection could not be guaranteed, so the official reason.

Jérôme shakes his head, too long had been discussed with the city exactly about this, too sophisticated was the planned security concept. “This could not be the downfall of the Wheels and Waves, just another obstacle,” adds Jérôme.

From now on, a court in Pau would deal with the ban. After all, freedom has a high value in France. And indeed, a judicial decision withdrew the ban on June 21, 2021, just ten days before the event was scheduled to begin.

Won and yet lost?

“Too late to restart the festival in full swing. But no reason not to hold at least two off-road events, the El Rollo Dirt Track Training Camp and the Deus Swank Rally,” grins the smart Norton Commando rider.

Do you want to find out how it turned out? Read the full story in Super Special issue 30…